Anyone who pays attention, reads a lot (especially between the lines) and listens carefully will be amazed about the state of modern banking, the financial sector at large, taxation schemes, and currency management.

I find that the more I find out, the more I ponder these things, the more my head hurts and wants to “explode”.  I’m often dumbstruck about people’s lack of knowledge about some of these things, and even worse the lack of caring…

I just want to throw some things out there, as bullet points, to stimulate your thought-process, to engage in discussion, to awaking your desire to research and find out more, … simply, raise awareness.

So many of these things are poorly (or inaccurately) covered by Sheepstream media, and the “powers-that-be” are perfectly happy having the masses of sheep continue to not know or not care. Better for them!

To read about why NOW is the time to invest in real Gold and Silver, and how you can start TODAY to PRESERVE your hard-earned money, Check out my book on Amazon! 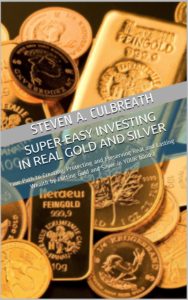